The Rappahannock Lions Club makes apple butter at the Keelzetown Community Cannery, in Keezletown, Virginia, the only remaining “can-your-own and non-profit” cannery in the State of Virginia.

Where is Keezletown? It is outside of Harrisonburg, VA. off of Route I-81, as shown by the black circle in the lower left hand corner of the map shown below. From Sperryville (shown in the upper right hand corner) to Keezletown via Route 211 to New Market and then to I-81 South to Route 33 East and Keezletown is about 60 miles.

For history buffs, the web-site of the cannery contains the following background information:

“The Keezletown Community Cannery, located in the Shenandoah Valley in a small town called Keezletown, began in 1942 in the basement of the Keezletown School. As World War II was raging and food and supplies at home were rationed, people began growing “victory gardens” as a concept to foster patriotism and community spirit. Many citizens grew their own food and used canneries around the country to can it and to assist in the war effort (canned food was necessary for shipment overseas) as well as to supplement their families own supplies (food stamps rationed what people could buy in the stores). Such canneries were often supported in part by school systems who used them for educational purposes as well.”

And, below, we have proof that the Lions Club was on-site on Friday, September 23, 2016, to make the apple butter. Those in the photo were on a “break” outside the cannery. 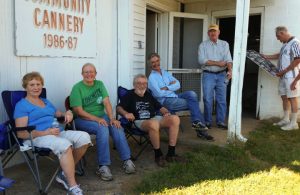 Below, here are the pristine pints jars waiting to be sterilized in steam tables. 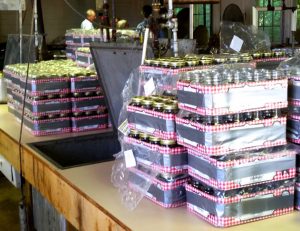 A cheerful Lions Club member and his wife are ready to insert some of the jars into the steam table. 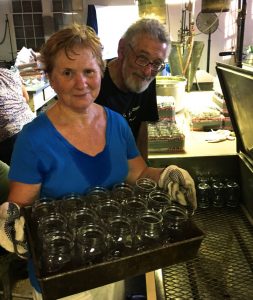 In the meantime, another Lions Club member takes a turn at stirring one of the six vats available to make the apple butter. Members of the morning crew left Sperryville at 4:00 AM to make the trip to Keezletown, VA, and they made up the bulk of those who mixed the cut apples after the secret ingredients were added in making the Lions Club apple butter. Stirring is tough work. 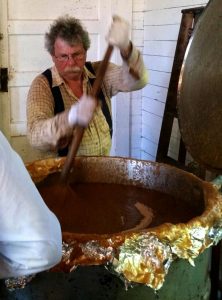 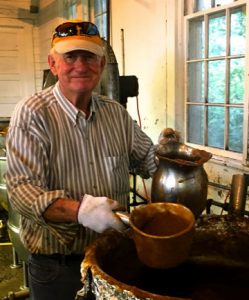 Below, amongst other Lions Club members, one uses the jar-filling device.  Over the course of Friday, September 23, 2016, over xxxx pint jars were filled, then lidded and capped, as shown in the following photo. 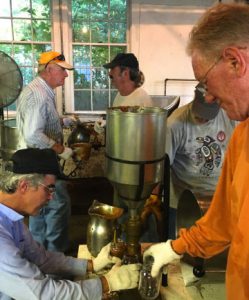 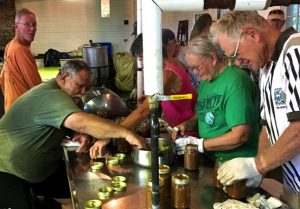 Finally, the completed jars are packed in cartons and loaded into a van for a trip back to Rappahannock County. 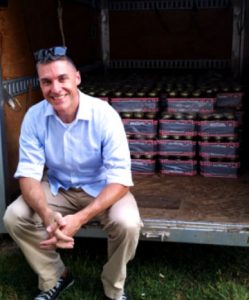 The following days, the apple butter was available at the Quike Mart along Route 211 in Rappahannock County.  Below, a friendly Lions Club member is ready to sell the apple butter to the public.  Also available are Whitley’s “Select Super Extra Large Virginia Peanuts,” and brooms. 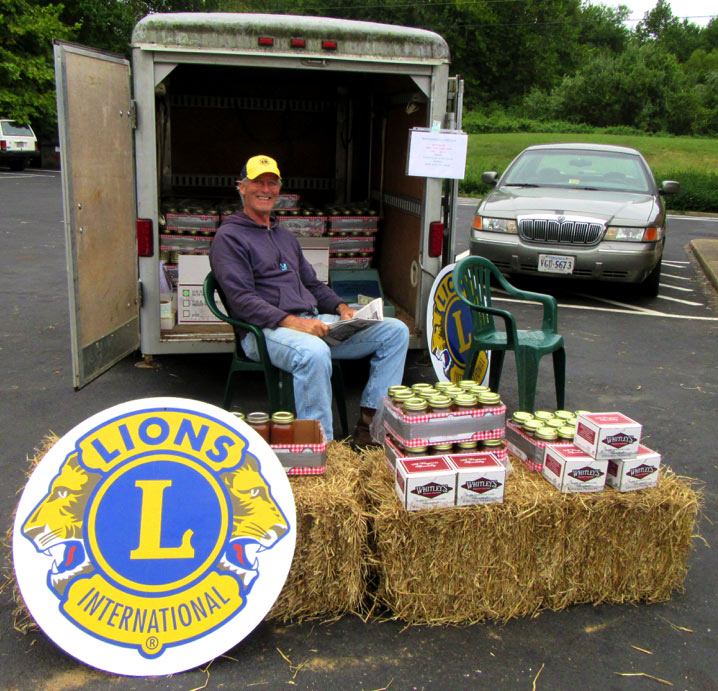