This was another very well organized event by Jim Blubaugh, who now has ten of these Rappahannock County nights under his belt.  In summary, it might be well to start with the item about Camp Fantastic as submitted to the Rappahannock News and published on Thursday, August 24th, 2017.

“For 35 years the Rappahannock Lions Club and other volunteers from the County have hosted Camp Fantastic’s most popular of its weeklong series of events for kids with terminal cancer. Half of the 30 volunteers from the Lions Club are shown above.  In total, County volunteers provided and prepared a record breaking 300 meals for the kids, medical staff, visitors, and volunteers.  Each year it is like magic when the kids arrive to eat what they want, sing and dance to a small band, shout with glee, and share camaraderie amongst themselves.  And then, as twilight descends, they leave for their quarters with rich memories of a truly remarkable moment in time.”

The above news item provided a little publicity about the Rappahannock County Lions Club as well as the county in general.  The late afternoon of Tuesday, August 15, 2017, saw some 30 volunteers from the Lions Club show up at the pavilion at the Northern Virginia 4-H Educational Center at Harmony Hollow just south of Front Royal, off of Route 522 North.  The weather was of some concern to a few as dark clouds were gathering on the Blue Ridge Mountains in Rappahannock County in the late afternoon, but in Harmony Hollow there was blue sky and white clouds and no rain made an appearance.  The following photo shows the weather pattern above a recreational area across the way from the pavilion about 4:15 PM, and the subsequent photo shows the pavilion itself with three tents.  Teams of Lions Club members had taken care of a number of tasks at this point, such as picking up food, extra tents, and other supplies, plus cleaning the pavilion and the kitchen area, and they had made a start on the preparation of food to feed 300 kids, medical staff, visitors, and volunteers. 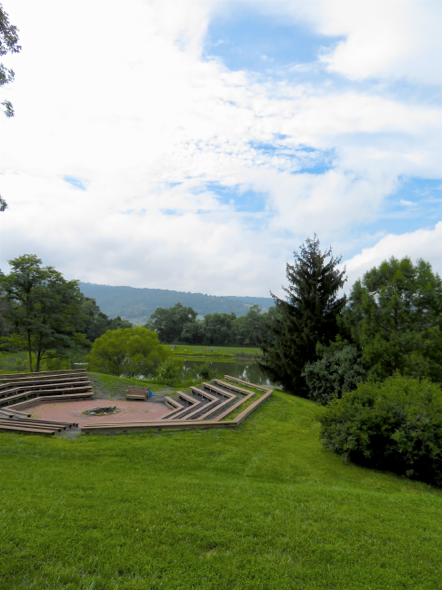 The three blue tents were used to shelter the medical staff that was in attendance to take care of the medical needs of the Camp Fantastic kids during the afternoon and evening.

There were other volunteers from Rappahannock County as well, including Marie Davis, one of the original starters of the event, shown below with Natasha Bush, wrapping plastic utensils in napkins.

Some of the decorations on the picnic tables were of interest, such as those that included a lion in their motif. 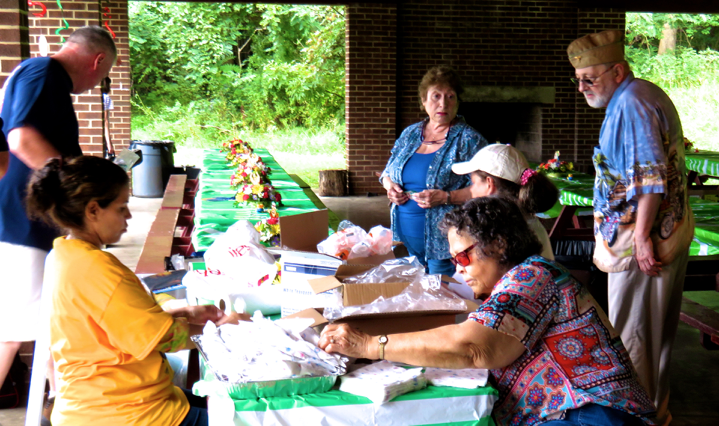 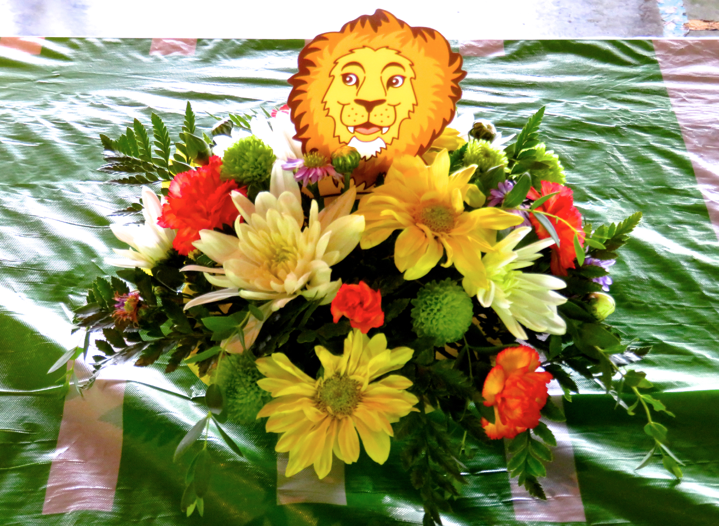 And every year, tall members of the Sperryville Volunteer Fire Department take care of mounting decorations inside the pavilion, and this year they included a large banner denoting that it was “Rappahannock Night at Camp Fantastic.”

Food preparation went apace, whether it was Mike Mahoney gracefully carrying in a stack of eight pizzas of the 32 brought to the pavilion, or the preparation of hoagies, or the boiling of water for the corn, or again, Mike Mahoney again gracefully carrying some prepared salads made by Jim Manwaring and another volunteer, or the Sheriff’s Department with their snow cone machine and their cotton candy machine. 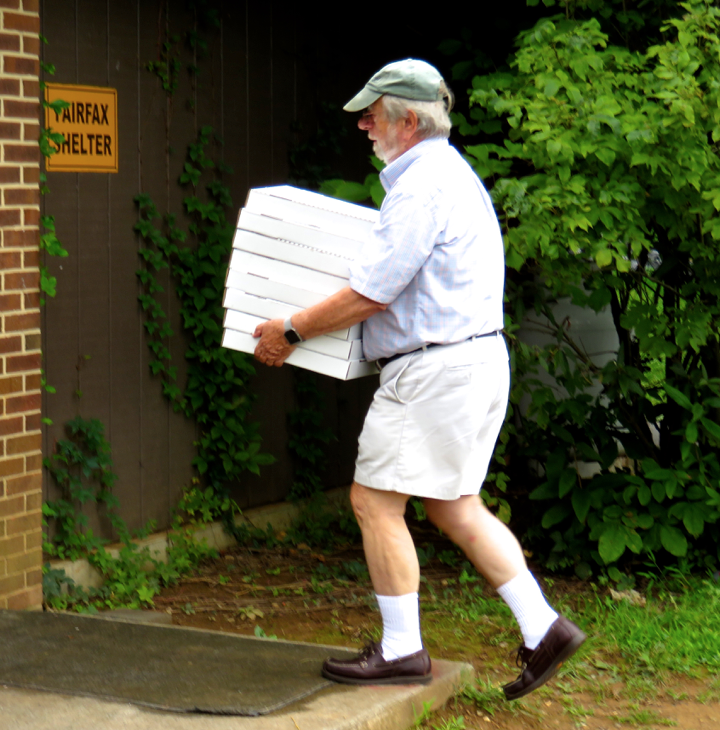 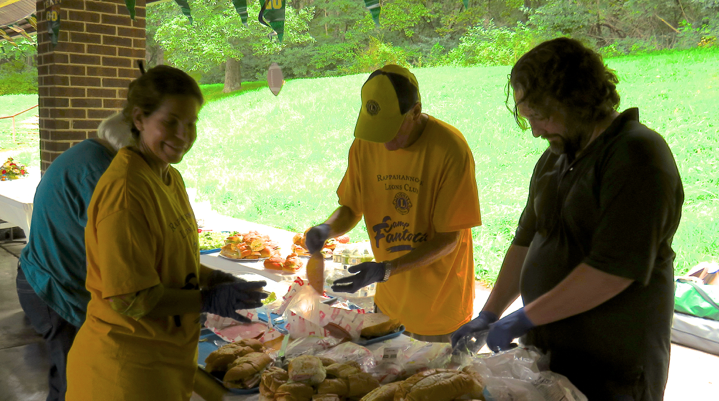 The hoagie crew prepared 72 six-inch hoagies, each cut into three pieces, for a total of 216 servings.  Above, from left, Carolyn Manwaring (Capt), Natasha Bush, Garry Giebel, and Paul Bush.

Below, shucked corn sits in trays awaiting their turn for a dip in the boiling pans. 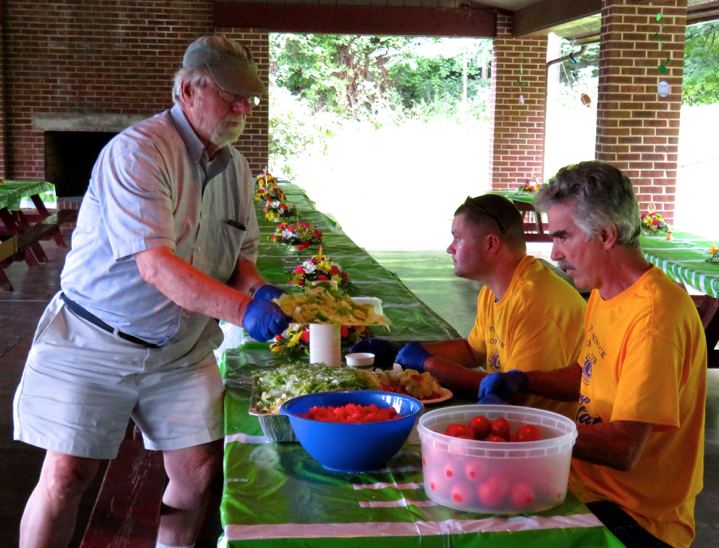 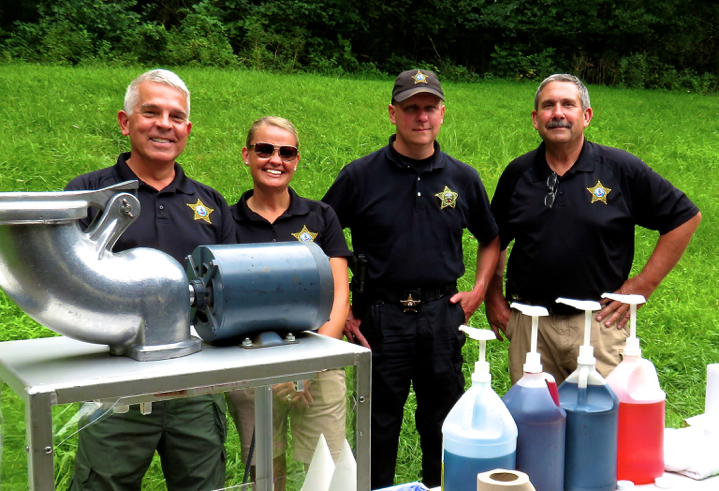 Captain Roger Jenkins (left) and other members of the Rappahannock Sheriff’s Office stand ready to make a wide variety of snow-cones.

The menu for the evening was as follows, the poster having been prepared by Bill Pragluski: 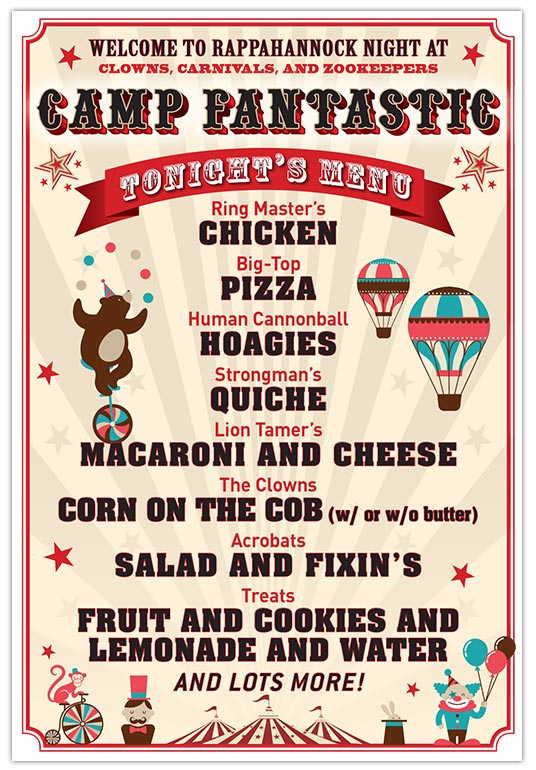 Around 5:30 PM, the Camp Fantastic kids started to gather at the pavilion with the medical staff, volunteers, and visitors all mixing together as shown below, and then the “Mad Hatter” director of the group had the kids check through him before receiving their meds from the staff under the blue tents and then picking up their gift bags nearby. 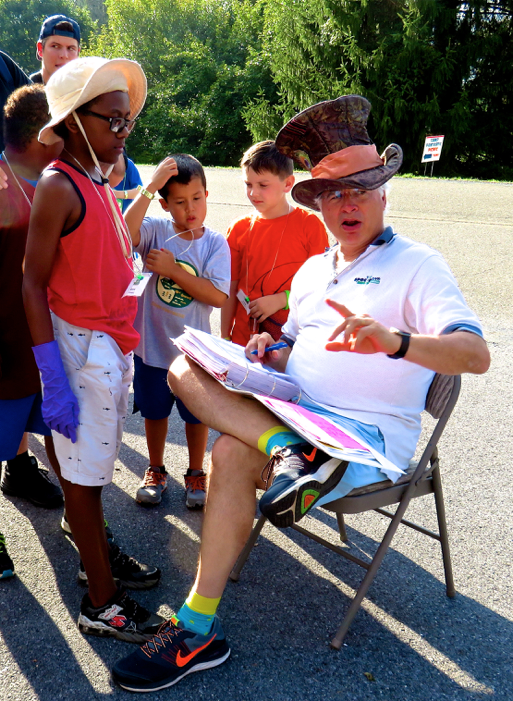 By then the place was teeming with people and kids, with the three-piece band Good Bad Blues providing pulsating music. 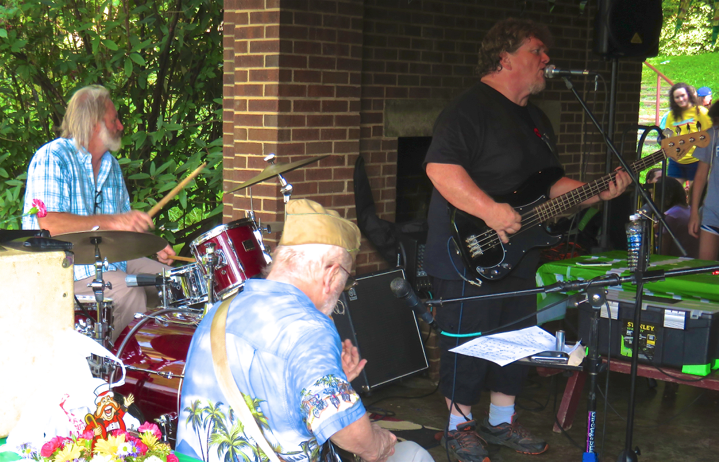 The “Mad Hatter” next checked with one of the serving lines to make sure all was in readiness, and then on his signal the kids and staff members started through the buffet lines which this year consisted of two serving lines in parallel.  Five different layouts were tested before the parallel approach was found to work best.

Shown below in the serving line from the right are Chuckie Jenkins, Greg Williams, Mike Leake, Cindy Williams, and some derelict. 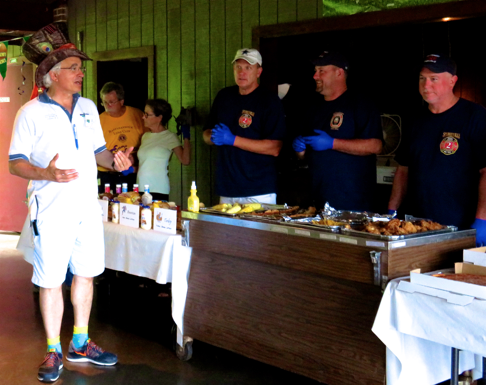 Below, we have a picture of the dual serving lines in operation, plus a few photos of the kids making their selections and then heading for a picnic table. 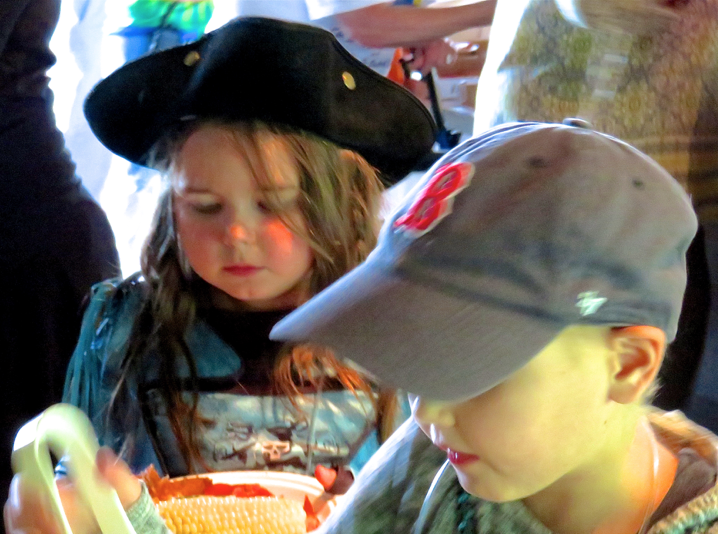 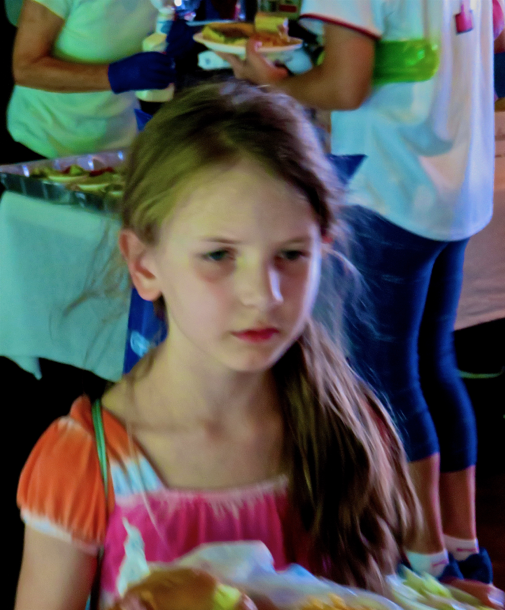 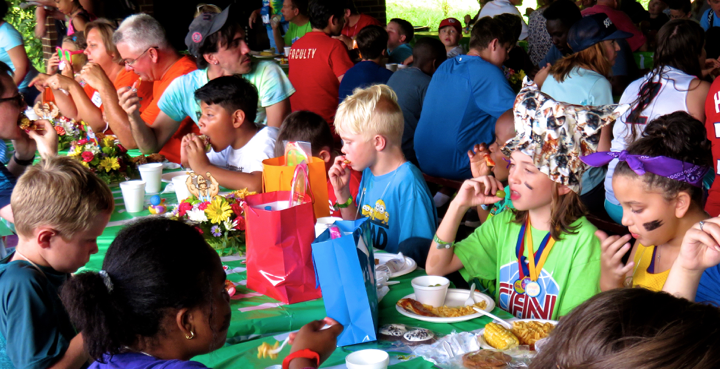 A popular item at the picnic was the cotton candy spun by members of the Rappahannock County Sheriff’s Department. 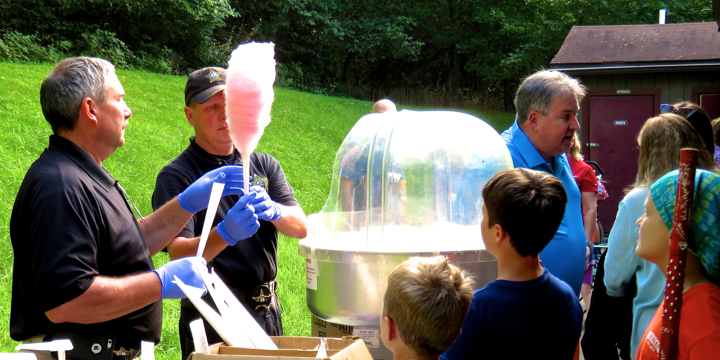 A poignant ceremony occurred at the end of the evening’s festivities when the kids gathered across the way from the pavilion, down in a small dell, where a “lowering of the flags” ceremony took place.  First the Camp Fantastic flag was lowered and then the American flag was lowered, with a song following. 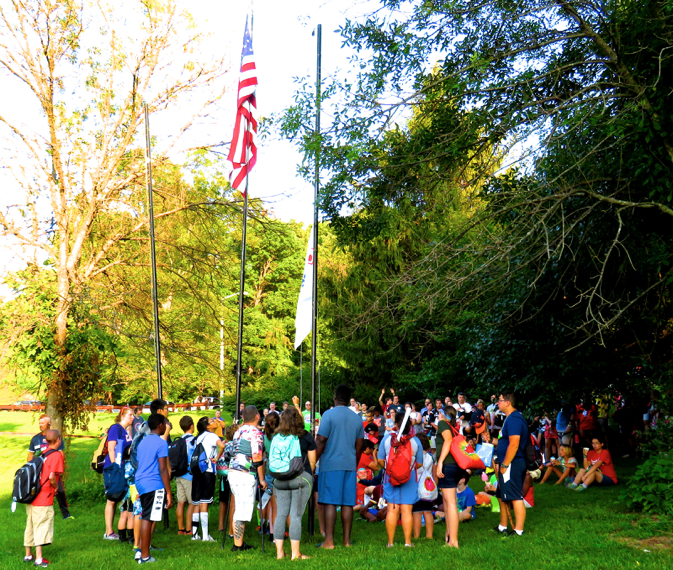 And so another Camp Fantastic comes to an end.  The kids and adults have left the pavilion at Harmony Hollow and now deer appear at twilight.  A light evening fog settles over the land.  A fitting end to a magical moment in time.   Photo below by Kaye Kohler. 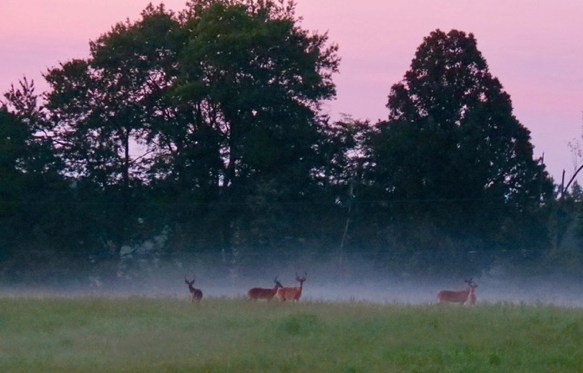