Farm to Table – How the Lions do it 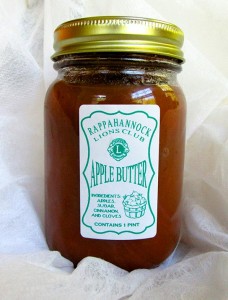 The local Lions Club is one of the few remaining Lions Clubs in the United States that still makes this traditional Lions Club delicacy.  This particular jar of apple butter was made on Friday, September 23, 1016, at the Keelzetown Community Cannery, in Keezletown, Virginia, the only remaining “can-your-own and non-profit” cannery in the State of Virginia.  The apple butter went on sale the next day, Saturday.

But the day before the visit to the Cannery, the apple butter was still in the form of apples ready to be cut up by twenty Lions Club members and a few of their spouses at the Rappahannock Co-Op.  Three days turnaround time is an interesting Farm-to Market example.  It is also interesting from a human-interest point of view.  As noted, the apples were just apples on Thursday as shown in the washing tub below.  There were 42 bushels of them to be washed and then cut up.  Since a bushel contains 126 apples, some 5,300 apples were cut up from 9:00 AM to 10:30 AM, a “personal record” for time by the Rappahannock Lions Club.

A Lion Club version of a sewing circle.

All the Lions Club volunteers who showed up at the Co-Op by 9:00 AM were instructed to bring a knife, a cutting board, and a chair.  The interesting part was the variety of knives brought and techniques used in cutting up the apples.  The photos above first show a representative section of the apple cutters; then a wider perspective of about a third of the crew.  You sat in your chair, cut up whole apples that were constantly appearing in baskets near you and then tossing the cut up apples in another basket close by.  The slicing and dicing was required in order that the apples could be properly processed at the cannery the following day.

An array of knives in use is shown below, plus cutting boards, including a piece of wood. 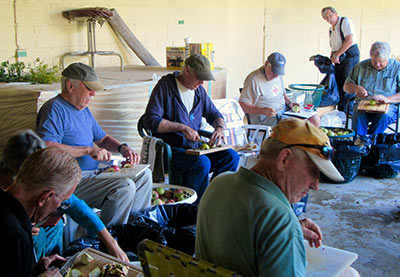 Below, a good hefty knife for the job.  Many used the knife straight up and down, others pivoted it on its point.  A long, heavy-duty bread knife, pivoted on its point worked well. 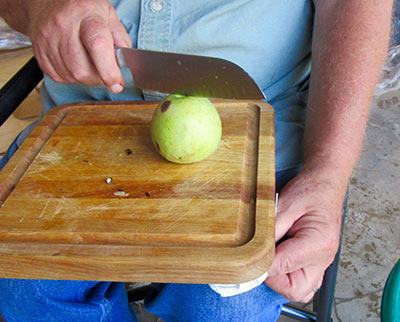 One woman, below, made use of a sturdy, but a delicate pink-colored, cutting knife. 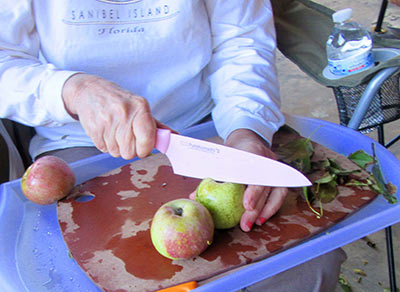 Careful of the fingers!

A high-tech apple cutter proved to be efficient in some cases, but mostly it did not work that well. 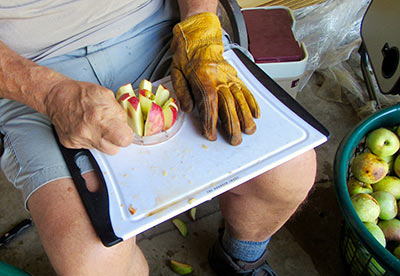 Another was very conscientious in eliminating bruises and blemishes from each apple. 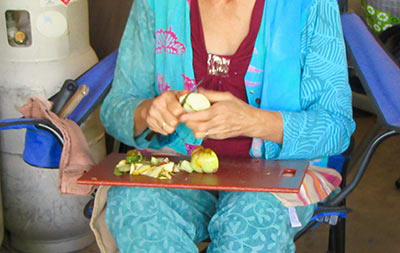 Some queued up their apples to save on repeated bending and stretching into the basket of uncut apples. 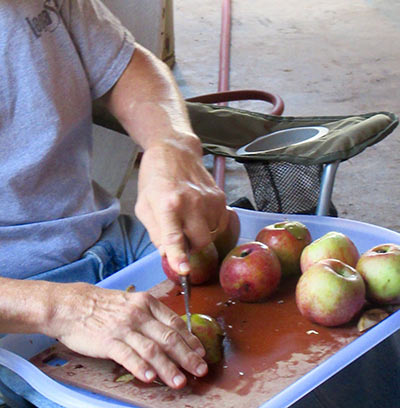 Others queued up the cutting results, again to save on repeated bending and stretching. 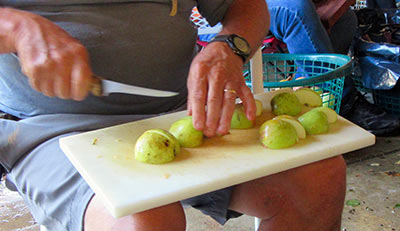 In the end, it was cleanup time, with some ballet moves to work the kinks out of the sitting for a long period. 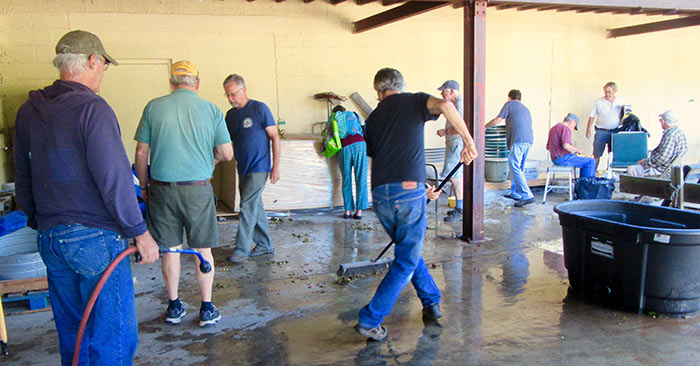