Sometimes the weather tests the mettle of Lions Club members as it did early on the morning of October 14, 2017, when many woke to a foggy day and the temperature at 45 degrees.  A glance out a window prompted some to yearn for another 40 winks instead of rising and preparing for the 10:00am gathering at the Sperryville Fire Hall for the setup of the 2017 Chilifest event. 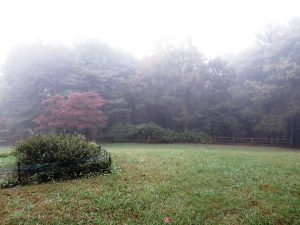 Even at the Sperryville Fire Hall the fog hung around, as evidenced by the photo below. 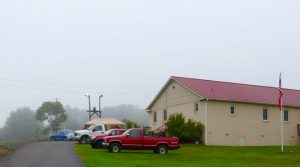 Inside the Sperryville Fire Hall, a dilemma had been solved, that being where the tables and chairs were placed in last year’s Chilifest: on the sides of the hall, or in the middle.  The middle option proved to be correct and the following photo is provided as evidence for next year when the same dilemma will likely appear. 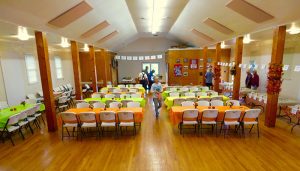 Signage, most of it done by Bill Pragluski, was prominent throughout the hall, identifying such things as the sponsors and who made the chili on both the private side and the professional side.  Thus, all chili contestants received prominent publicity in the voting for the best chilies.  The chili contestants this year were as follows: 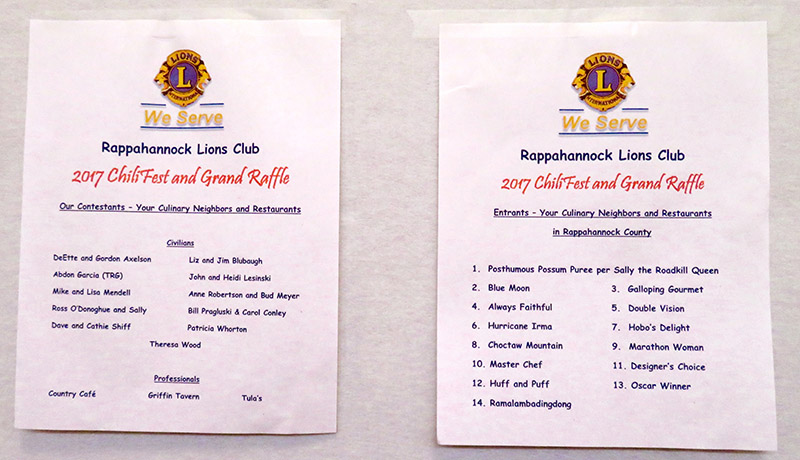 As a bit of history, there are two tumbling devices used over the years in tumbling the capsules containing the fifty $100 Chili Festival raffle tickets.  Depending on the decisions made by the 10 contestants selected from the tumbling machine in use during the raffle a person could walk off with anywhere from $500 up to the entire $5,000.

The current basic tumbler is a nice brass wire affair as shown below.  All 150 entries are placed in this drum to start the raffle.  From it, ten contestants are selected. 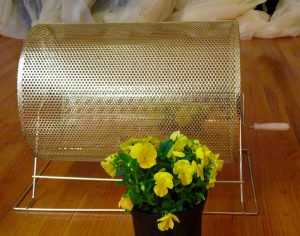 The original tumbling machine, shown below, is used during the “Spin or Split” stage of the raffle.  It contains just the capsules of the ten finalists as the finalists sit on stage. 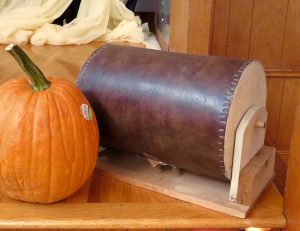 There is one other tumbler to be noted, that being one made the Boy Scouts, but it never worked that well.  For historical purposes it is show below:

While on the topic of the actual raffle, here is how the raffle capsules are handled.  When a raffle ticket is originally sold for $100, the Lions Club Treasurer, Frank Raiter, saves the numbered stub-end, with the name, address, and phone number of the buyer, for processing at the Chilifest as follows.  It is a three-man operation.  In the photo below, “Bud” Meyer on the back left is opening a capsule.  Next, Frank Raiter, on the right, stuffs the capsule with a numbered stub in numerical order.  And, finally, Gary Geibel, on the front left, inserts that capsule into its like-numbered hole in the board.  150 numbers, 150 capsules, 150.  QED. 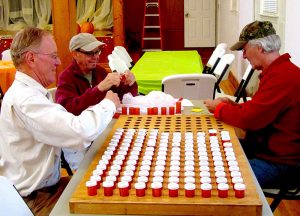 The finished product is shown below at the entryway to the Sperryville Fire Hall, with Frank Raiter displaying and guarding the boa​​rd after completion.  He checked people in. 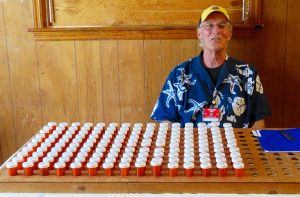 One of the ideas for the Chilifest was to get people to move around more, both inside and outside, and thus the idea of a wood fire where people could sit on the bales of hay.  This did not work as can be seen by the evening photo of the wood fire.  It was never lit. 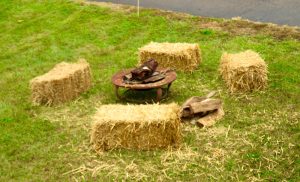 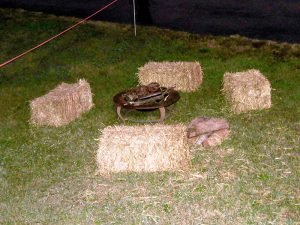 Some fall decorations were used on the front area of the Sperryville Fire Hall, where Joel Daczewitz is show below helping Kathy Grove with the corn stalks, pumpkins, flowers, bales of hay, etc.  The Chilifest started to draw people around 4:00 PM, and Bob Anderson took care of getting the cars parked at the foot of the driveway up to the fire hall. 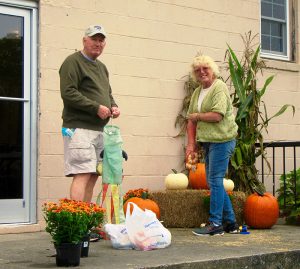 Below, planning the parking, with Larry Grove, Jim Manwaring, and Joel Daczewitz, giving Bob Anderson, at the far right, some guidance westward, and further below, the neat rows of parked cars to the eastward.  Prior planning prevents panic. 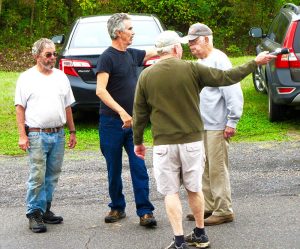 The Lions Club tent was used to shelter the bar, which this year was placed outside.  This was another idea to get people to move around inside and outside of the Sperryville Fire Hall.  Below, faithful Kit Johnson ran the bar and spent much time swatting away gnats and flies.  It might be better if next year the bar was placed inside.  Kit was the unsung heroine of the evening. 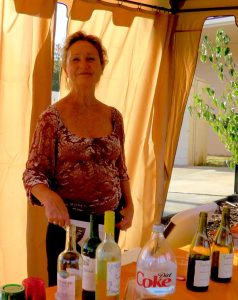 As more people arrived, the line for the chili entries came alive as samples were taken and voting for the best chili recipes got underway.

Old friendships were renewed as evidenced by the appearance in the photo below of Bob Chappell, a former Lions Club member, shown talking with Bill Pragluski and Jim Blubaugh. 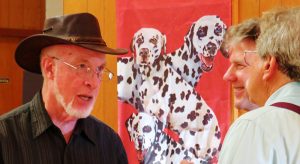 Greg Rushford, caught by surprised, made it to the Chilifest to relax from his journalistic endeavors.  Greg, incidentally, had the honor of being the first person to buy a raffle ticket for this year’s Chilifest, even though he was away on assignment. 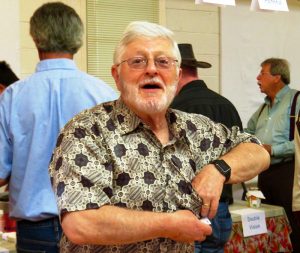 Notables were in attendance as evidenced by Rappahannock County Board of Supervisors member, John Lesinski and his wife Heidi, shown here sampling some chili.  John also provided a delicious pot of his own chili.  On the left, one of the four Leo club members from the local high schools is helping to serve the chili. 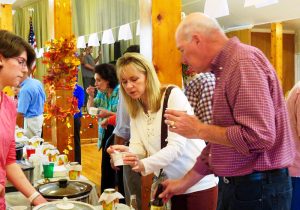 Outstanding music for the event was provided by Tyler Johnson (on banjo on the right), a former Bland Contest winner, along with (from right) Richard Brady, Duane Siler, and Doug Bywater. 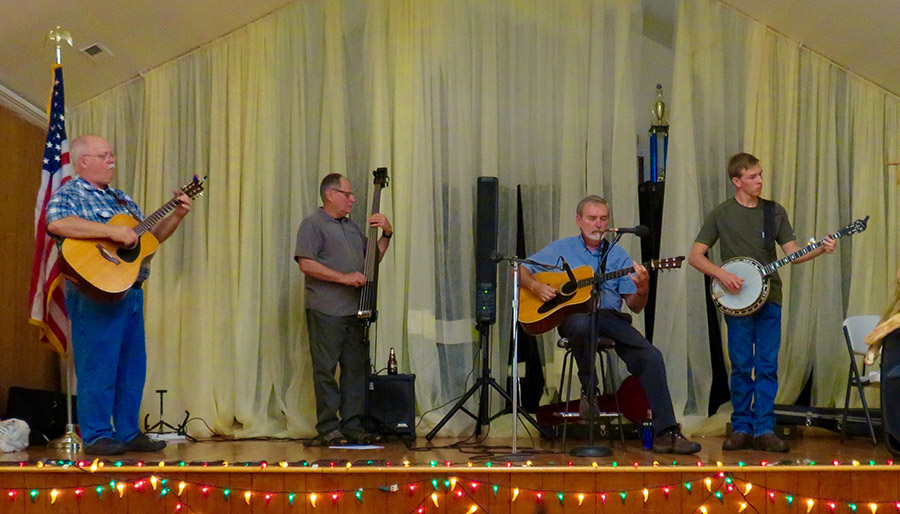 Below, a general view of the Chilifest in full swing as the grand raffle was about to get underway.  The potential to win $5,000 was nothing to be sneezed at.  (By the way, staring at the camera here, is this year’s winner of best chili — DeEtte Axelson.)

At this point, it might be well to present some of the signage prepared by Bill Pragluski to identify the uses to which the Rappahannock County Lions Club makes from its fundraisers. 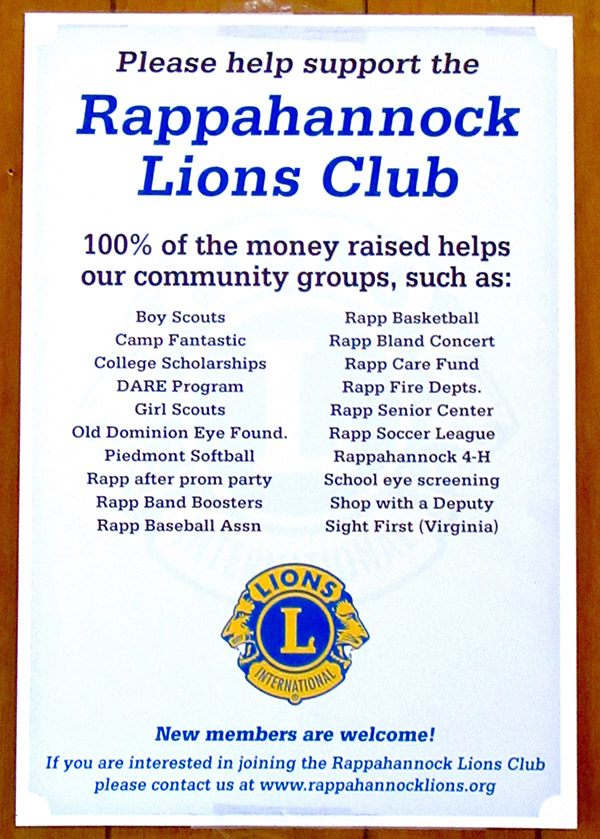 And so the Grand Raffle begins.  Jim Blubaugh served as host and effectively built up the excitement as ten raffle ticket holders were selected to take their place on the stage of the Sperryville Fire Hall.  The photos below shows this process.   First, the brass tumbler is turned by Rick Kohler at the right in the photo below, along with Andy Berry verifying the honesty of “Quick Hands Rick”, as one of the 150 capsules is selected.  Rick hands the capsule to Andy, who unscrews the capsule and then hands the raffle ticket stub inside to Jim Blubaugh.  Jim, in turn, announces the number and the person holding that ticket takes their place on the stage.  If the ticket holder is not in the hall, a surrogate is selected to take their place on the stage. 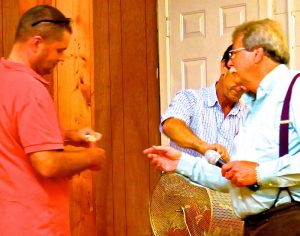 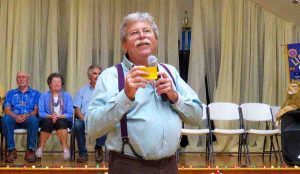 And so the process goes on until the ten finalists are on the stage.

Now comes the critical part of the Grand Raffle.  After Jim has announced each of the ten potential winners, their ticket stubs were placed back in their capsules and put into the old tumbler.

The contestants are then asked, in order, if they wish to “SPLIT” (in which case the $5,000 is split evenly amongst those on the stage) or “SPIN” (in which case the old tumbler is spun and one of the ten capsules is selected for elimination).  If any stage member says “SPIN”, the tumbler spins.  This continues until everyone on stage agrees to split the pot, or until only one contestant remains — as the winner.

Obviously, the audience wants to hear those on the stage say, “SPIN.”  That reduces the number of the stage, leading to the potential of someone getting the entire $5,000.  At the 2107 Grand Raffle this procedure led to there being only two left on the stage.

In the end, with two finalists on the stage, Jackie Del Grosso, representing herself, and Yogi sat in for Debbie Knick, the County Treasurer, who was co-winner of the loot. Each walked off with $2,500. 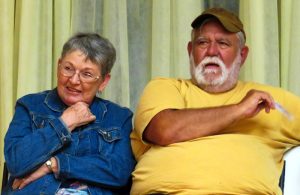 And so another Rappahannock County Lions Club Chilifest and Grand Raffle comes to a successful end.  We close with a photo of Jim Blubaugh shown in mid-stride.  Jim loves this stuff.  (Kinda, says Jim.) 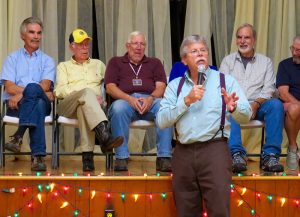