Once more, volunteers from Rappahannock County provided Camp Fantastic with a spectacular late afternoon and early evening event for children, ages 7 to 17, who are undergoing treatment for cancer.

Held annually for a week since 1983 at the Northern Virginia 4-H Educational Center south of Front Royal, Tuesdays have traditionally been Rappahannock’s day at Camp Fantastic, and so it was again on Tuesday, August 16, 2016.  Medical staff and volunteer attendants from the National Institutes of Health were on site providing medical care as needed, but the aim was to let the kids be kids, to dance and sing to a small band, bond with one another, and have a great picnic-like meal in a sheltered pavilion located in the woods.

This year’s theme was cats and dogs of sports teams and so they created their own costumes to show off their inventiveness.   The camp is run in conjunction with Special Love, Inc., a non-profit organization based in Winchester, VA, that for 34 years has provided unique experiences for children with cancer and their families.

The Rappahannock County effort has been led for years by Beverly Atkins (formerly Commissioner of Revenue), Marie Davis (from the Social Services Dept), Linda Baldwin (at the Rappahannock 4-H office), Jan Makela (of the BH&G Realty), and Sandra Jenkins (representing Washington Baptist Church).   They are the brains behind the event.  The muscle and much of the money has been provided by the Rappahannock Lions Club; 18 members of the Club purchased food, cleaned the pavilion, and staffed the food lines.

Other volunteers were from the Rappahannock County Sheriff’s Office (who provided sno-cones for the kids), the Sperryville Volunteer Fire Department (who set up decorations and staffed the serving line), and others from the County who decorated the pavilion, laid out gift bags, and provided face-painting for the kids.  Music from a two-member band provided nearly continuous music throughout the late afternoon and early evening.

The following two photos show the transformation of the pavilion at the 4-H Educational Center south of Front Royal, VA, from the setting at 3:15 PM, when an initial Lions Club set-up crew arrived to that of 7:00 PM, when Camp Fantastic was in full swing.

Pavilion once the kids arrived

The menu for the evening was as follows, and this involved the accumulation and preparation by the Rappahannock County Lions Club of enough food to feed 245 people.

The food menu, done by Bill Pragluski, in the cats and dogs motif. 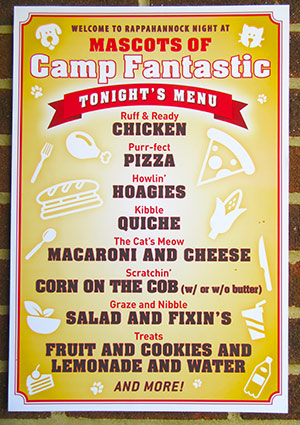 This involved deploying 360 pieces of chicken from Kentucky Fried Chicken in Front Royal, 20 pizzas from Melting Pot in Front Royal, 6 pizzas from Griffin Tavern in Flint Hill, 20-foot long hoagies from Subway in Front Royal, 2 large quiche from The Inn at Little Washington, and the preparation of innumerable lettuce and tomato salads, plus a great number of freshly made corn on the cob.  The corn was courtesy of Muskrat Haven farm in Amissville, who has been its generous provider for years.  Jan Makela provided half of the tons of macaroni and cheese for the kids, and it is always popular.  Sandra Jenkins and the Baptist Church provided the other half of the mac and cheese, plus juices, water, and homemade cookies.

Once the kids started to arrive, about 5:30 PM, there were T-shirts and gift-bags for them to pick up, and then photo-taking for memories, such as the one shown below.

Young campers with one of their doctors 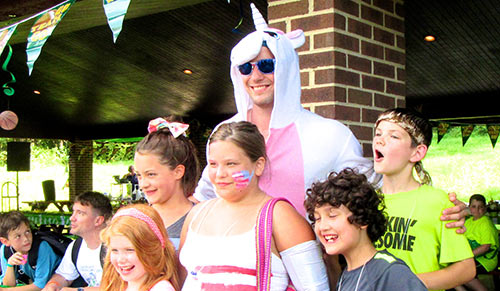 A surprising number of kids took an interest in the annual yearbooks of past Camp Fantastic events published by Special Love, Inc., of Winchester, VA.

The kids scour through scrapbooks of photos from previous Camps,
looking for photos of themselves and friends. 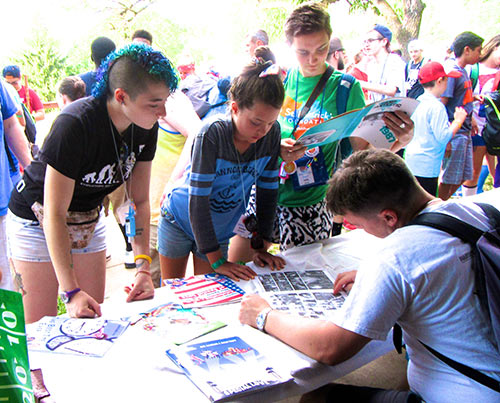 Here’s the serving line, ready for the eager kids, medical staff, support volunteers, and others to start streaming through.

The youngsters had quite a selection of food to choose from.

The serving line in full swing. Campers and their aides working their way through. 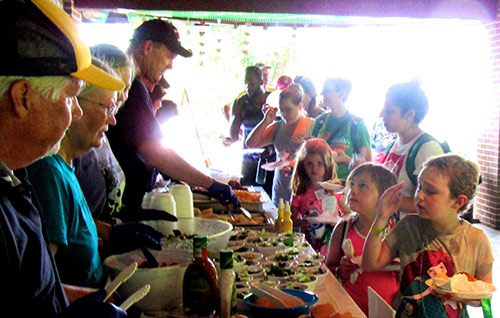 A young camper works her way down the food line. 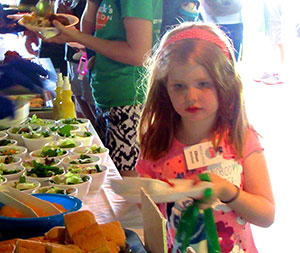 The celebrity of the evening was a young man who had arrived in a wheelchair, but who now stood and delivered a rousing song, backed by the band, bringing a great round of applause from the pavilion filled with children, medical personnel, volunteers, etc.  One member of the staff, who possibly had worked with the young man, showed a degree of support and unadulterated appreciation of the young man’s performance that it truly exemplified the meaning of the staff-patient relationship shown at Camp Fantastic.  Below is a photo of this event: the singer is at the left, and his booster at the right.  One had to be there to witness and feel the emotional impact of this moment.

One of the campers rose from his wheelchair to belt out a song. 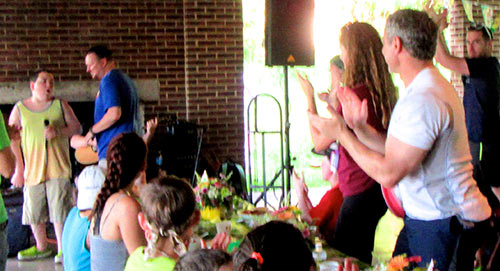 In the meantime, how were things going in the kitchen and on the serving line?  Below is the view from the kitchen: kids were still coming through and were still being served.

And so the evening soon came to an end.  The children made their way out of the pavilion to the awaiting vans or else they started to walk back to their quarters in small groups.

The idea of camping out for children with severe cases of cancer is now very widespread.  The first such camp was held in Florida in 1976, and Camp Fantastic began in 1983.

According to the literature on the subject, the camp serves several purposes:  “(1) to improve the quality of life of pediatric cancer patients through a normalized camping experience, thereby exerting a positive influence on the child’s sense of well-being and self-esteem, as well as his/her relationship with parents, family, and peers; (2) to enhance relationships between healthcare professionals and patients, with these groups getting to know each other in a new light, and gain insights into each others’ problems and needs; and (3) to serve as respite for the patients’ families, especially when care needs are significant.”

These goals were once again met with Camp Fantastic for 2016.