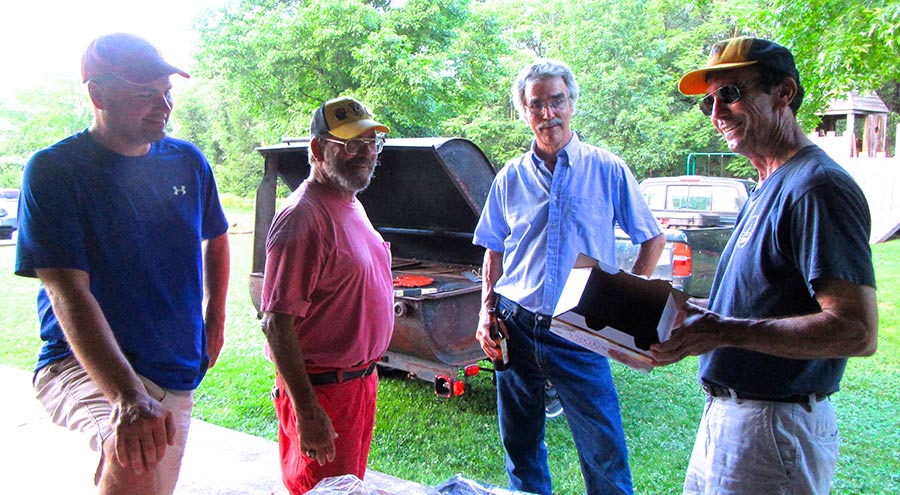 The annual Lions Club picnic was held at the Rappahannock County Park on Thursday, July 14, 2016.  It had been a scorching hot day with temperatures in the low 90s, and high temperatures lingered on into the evening.   Here’s some photo coverage of the picnic.

First off, there was a surprise for those in charge of the grille.  The hamburgers obtained for the picnic were pre-cooked and frozen.  The photo above records this discovery, with Andy Berry, Larry Grove, and Jim Manwaring looking on as Rick Kohler reveals the news after reading the contents of the box in his hands.  Did this “culture shock” stump the grille-men?  Not a bit.  They slowly recovered and followed the instructions on the box. 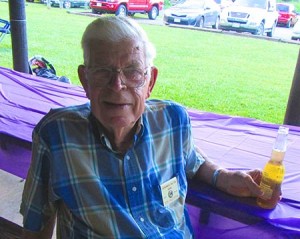 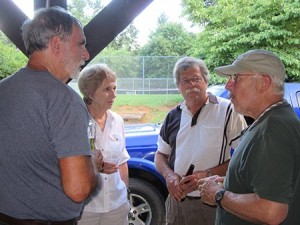 Deep conversations were held amongst the attendees as attested by Ross O’Donoghue, shown below on the right, keeping unknown, unknown, and Jim Blubaugh spellbound. 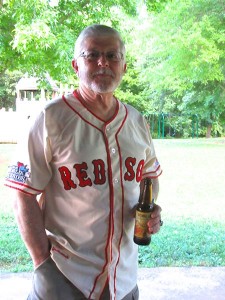 Then we had Greg Rushford with a Vienna Lager in hand, and outstanding in his field, ready to play ball.  The story on the uniform is as follows, direct from Greg:  “Growing up in the 1950s I wasn’t even good enough to make my Little League team.  But now I play in the big leagues and hang out with former baseball greats like Luis Tiant, Al Bumbry, and Trot Nixon, sort of, anyway.” Greg is one of 140-some Hall of Fame wannabes — from ages 30 into the 80s — who participate in the Boston Red Sox’ fantasy camp each January, held in the team’s spring-training facilities in Ft. Myers, Florida. “We play on the same fields and use the same locker room as the real big-leaguers,” living our childhood dreams for a week. 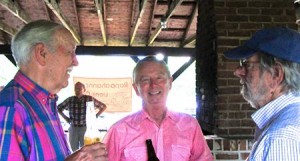 Within the shade of the pavilion another conversation was underway, with Gordon Axelson, Spots Williams, and Mike Mahoney just before it was announced that the food was ready.

Starting through the line, we have Rick Kohler on the left below, taking no chances with a large bottle of mustard by assuming a position where he would be ready for anything that might happen – explosion, implosion, over-squirt, under-squirt, flatulence sound, or, worst of all, a ffftf indicating the bottle was empty. 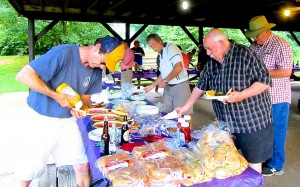 Across the way is Tom Tepper, with Bill Nenninger next, and Jim Blubaugh well down the line. 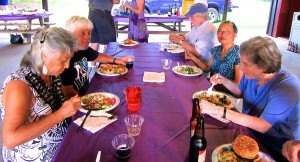 Finally relaxing, having the food, and enjoying good conversation, we have a table of happy campers.  Clockwise around the table we have Liz Blubaugh, Bill Gadino, Mike Mahoney, Lucy Rushford, and Martha Weiss. 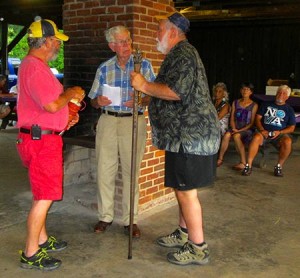 It was then that a light rain started to fall, so the 2016 Lions Club picnic wrapped up in a hurry.  A good time was had by all.