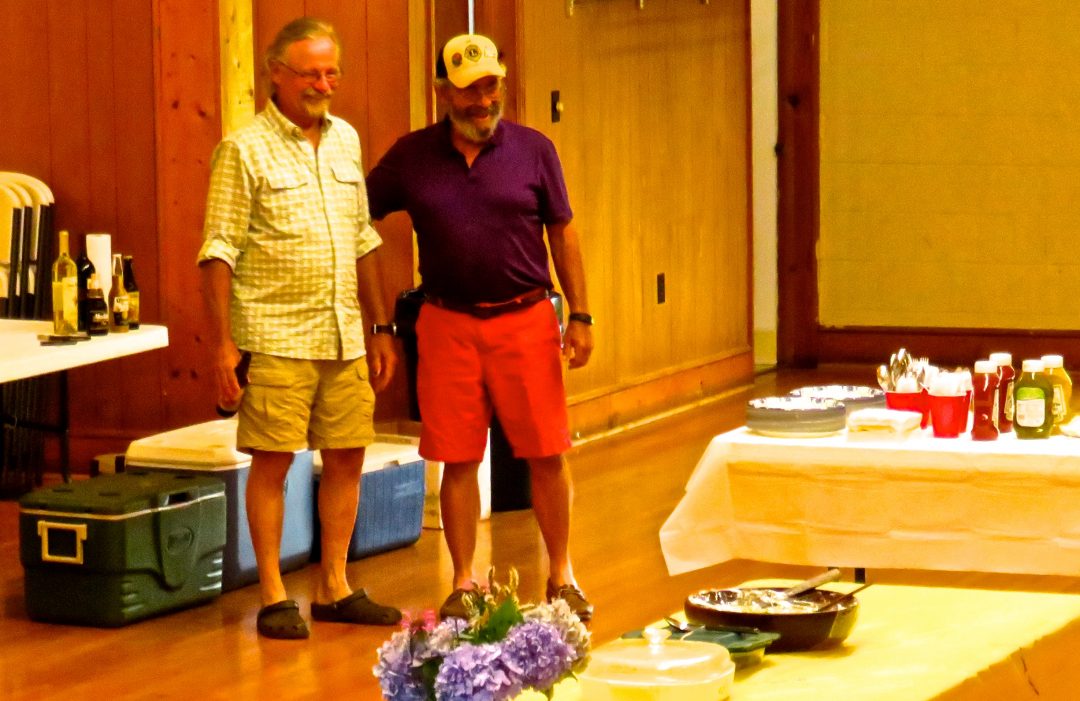 This year’s picnic was highly successful, and it may have set a new precedence.  At the suggestion of Lions Club member Tom Tepper, the picnic was shifted from the pavilion at the Rappahannock County Park to the Sperryville Fire Hall were there were some very obvious advantages.  Instead of sweltering outside in 90-degree heat, with the threat of a possible thunderstorm, and away from mosquitoes, ticks, bees, and other noxious insects, and no longer under a dark pavilion roof with its poor lighting and dicey rest rooms, the Fire Hall was indeed a major step up.  There was air conditioning, bright lighting, clean tables and chairs, tidy rest rooms, a real kitchen, a sound system, and other facilities that facilitated a smooth operation.

We start with a photo of Dave Shiff, bartender for the evening, with Lions Club President, Larry Grove, contemplating part of the set-up, a table ready for hotdog and hamburgers, with a large array of condiments and fixins in place.

It is also to be noticed that a stick of wood is still being used to hold up the heavy metal cover of the grill, the stick being seen over Rick Kohler’s right shoulder.  A better and safer solution is needed. 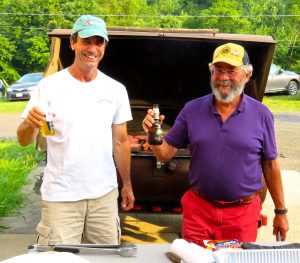 Inside the Fire Hall socializing went apace, with all sorts of topics being discussed.  Below, we have a table with Gordon Axelson, Roger Andrews, and Bob Anderson.  Bob is reviewing his notes, as he would be swearing in the new officers later in the evening.

At another table were Peter Hornbostel, Joel Daczewitz, Mike Mahoney, and Bill Pragluski.  A point seems to have been made and now some thought is being given to it. 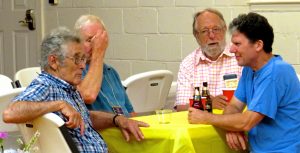 Drinks were free during the evening and a new beer was introduced, Modelo, seen on the table in the foreground on the right.  It is doubtful if Dave Schiff and Jim Manwaring were discussing its merits, but the appearance of a new item at the Lions Club bar must have had a story.  The story is that Jim Blubaugh tried the beer, liked it, and so a dozen or so bottles were brought to the picnic.  It is a Mexican beer from a company founded in 1925.  A connoisseur of beers described it as follows: “The aroma is sweet with hints of apple.  The impression at the first sip is sweet. This gives way only a bit to some bitterness from hops, which gives it a nice balance.  However, the bitter is not enough to break this beer from firmly being categorized as sweet.  [The beer] has no real lager snap at the end, just lingering hops.  This actually makes the second sip more balanced than the first.  It’s as if the beer gets better with each sip.  You will find some complexity and depth here but the flavors are very delicate.”  Of course Lions Club members just drink it. 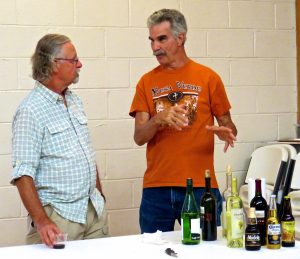 Below we have the food line in full swing.  With hot dogs, hamburgers, condiments and fixins in place, people were starting through the line.  On the left we have Roberta Anderson, Scott Wells, Bill Gadino in the background, circling around to get in line, Dick Redinger in the center checking things out, Bill Nenninger on the right making his selection, and Dave Schiff in the background sampling some wine. 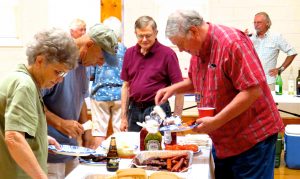 Nearby, at another table, were veggies and desserts.  The line-up of desserts is shown below, a tasty variety.   It should be noted that the picnic atmosphere was enhanced by the creative drawings of ants and other bugs on the table cloths, and this might in the future lead to more picnic simulations inside the Fire Hall. 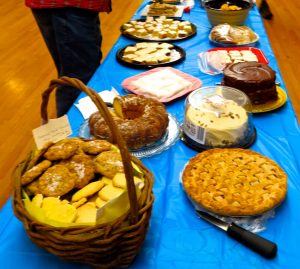 The meeting itself began with Larry Grove noting the accomplishments of the past year.  A new speaker and mic were noted by their actual use.  New members had joined during the year: Richard Antony, Gary Giebel, Bill Nenninger, Fred Stacy, and Scott Wells.  Jim Manwaring was thanked for leading the Apple Butter, Chili Fest, and a host of other events; Frank Raiter for serving as Treasurer, Jim Blubaugh for heading up the Camp Fantastic event and acting as Tent Captain; Bill Nenninger as the Pediavision expert, Bill Pragluski for various design efforts including the Lions Club web-site; Ross O’Donoghue as lead on Charter Night, Bill Gadino for leading the “rousing song” at meetings, and the Tent Crew of Richard Antony, Gordon Axelson, Paul Bush, and Dave Shiff, and, last but not least, Kit Johnson our bartender.
Larry told of money spent on worthy causes such as After Prom Night, the Bland Contest for musical performances, Camp Fantastic, college scholarships, eye glasses and hearing aids, Rappahannock Sports, 4-H club, the Senior Center, the Rappahannock County High School Band, Nature Camp, Habitat for Humanity, Sight and Hearing Van, Pediavision, Support of Eagle Scout project, etc.

Larry followed up the report described above with a special presentation to two members of the Lions Club Board of Directors: Frank Raiter, Treasurer, and Jim Manwaring, Secretary.  Both had held these key offices for five years, serving in an exemplary manner.  Larry gifted each with a Lions Clubs Centennial Commemorative Coin, and they, in turn, surprised Larry, as shown below, by presenting him with a Lions Clubs Centennial Commemorative Coin. 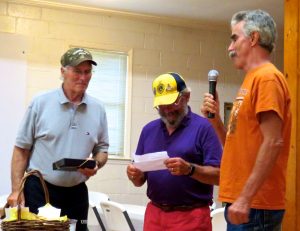 This Love Fest was followed by the entire Fire Hall’s attendees raising on high glasses of champagne in a toast to Bob and Roberta Anderson on their 65th wedding anniversary.  Only half of the attendees are shown below in this touching act.

The true business of the evening was the swearing-in event for the new Board of Directors, with Bob Anderson seeing to this ceremony.  Some were not present, two already held their positions (Frank Raiter and Jim Manwaring), and Ross O’Donoghue was sworn in with a separate ceremony.  The new Board is listed below.  Those in the photo below are numbered, left to right, in the list.
President: Ross O’Donoghue: separate ceremony
Vice President: Dave Shiff (6)
2nd Vice President: Bill Nenninger (4)
Treasurer: Frank Raiter
Secretary: Jim Manwaring (5)
1-Year Board Member: Gary Madson
1-Year Board Member: Joel Daczewitz (3)
2-Year Board Member: Gordon Axelson (7)
2-Year Board Member: Rudy Segaar (2)
Foundation Representative to Board – Jim Blubaugh (not present)
Tail twister: Paul Bush

In the photo below, Bob Anderson hands Ross O’Donoghue the Lions Club gavel, symbol that he is now President of the Rappahannock County Lions Club.  The out-going President, Larry Grove, is at the left. 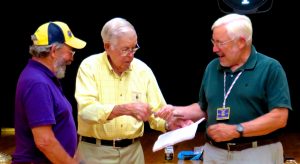 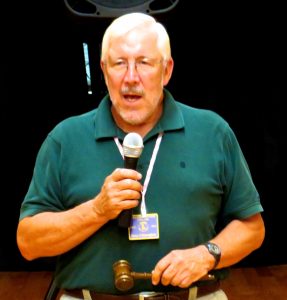 The new President of the Lions Club, Ross O’Donoghue, next gave a short speech on what he hoped to accomplish during his term in office.
← Lions Club Picnic of Thursday, July 14, 2016 Oh, Wow! There Are Other Lions Clubs? →