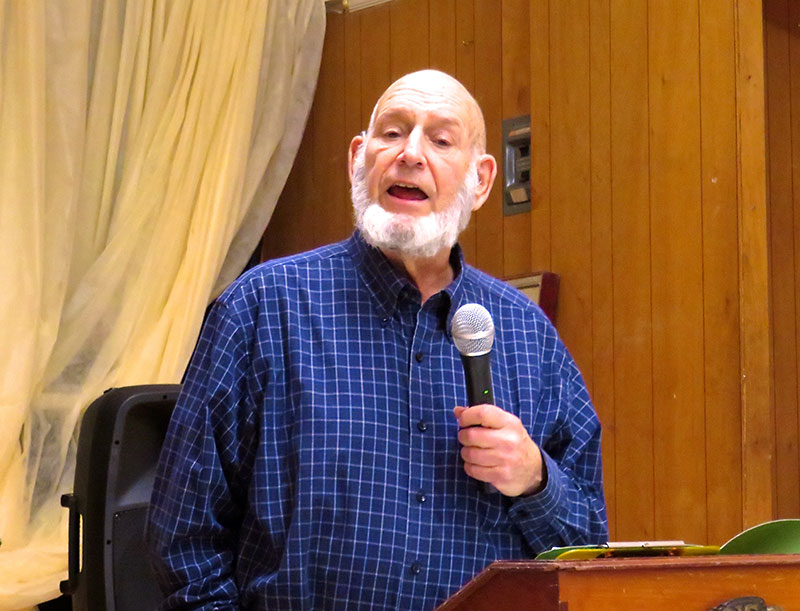 At the January 11, 2018, meeting of the Rappahannock Lions Club, members and guests were provided with a comprehensive presentation on cochlear implants to solve the problem of a damaged inner ear.  He related his own problem of hearing loss and the eventual use of a cochlear implant for his left ear.   This is not the place to describe the technical aspects of a cochlear implant, but a video by a company, Blausen, helps to understand its usage:  https://blausen.com/en/video/cochlear-implants/

Bruce next noted the increasing hearing loss and tinnitus (ringing or hissing in the ear) in servicemen deployed to Iraq, Afghanistan, and elsewhere due to their exposure to gunfire, explosions, large engines, helicopters, jet aircraft, etc.  Further research reveals a National Institute of Health (NIH) article of Jan-Feb 2015 noting “hearing loss is the most common service-connected disability” and that “nearly one-half million US veterans are currently receiving over $1 billion annually in Department of Veterans Affairs (VA) compensation for hearing loss.”

“Evaluation of the candidates was performed according to a protocol created in our department that included patient medical history, general health check-up, ENT [eye, nose, and throat] examination, audiometric evaluation, CT [computed tomography]

and MRI [magnetic resonance imaging] scans, psychological profile of the candidate, and logotherapeutic assessment. If the results were favorable concerning the exact localization of the defect, satisfactory excitability of the acoustic nerve, the mental capacities of the candidate, and the possibility of performing surgery, the patient was scheduled for surgery. Necessary prerequisites also included the patient’s informed consent and that of his/hers entourage to undergo the operation and the necessary post-operative training, as well as realistic expectations of a satisfactory result.”

As to costs for a cochlear implant Bruce noted that in his situation Medicare and a secondary health provider covered most of the costs, and his out-of-pocket cost was $2,000.  He noted that one survey showed that those receiving cochlear implant were 80% satisfied, while those using hearing aids registered 50% satisfaction. 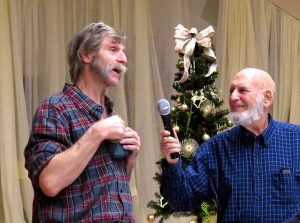 Also at the meeting was Bruce Westfall, a friend of Bill and Carol Pragluski, and he had an older model of a cochlear implant made by Clarion.. Bruce Westfall was born deaf and through sheer determination and abundant skills overcame his deafness to become a remarkable craftsman and jack-of-all trades with a very loyal customer following for his own landscaping business. He uses an iPad and email to communicate, and also is adept at lip-reading. 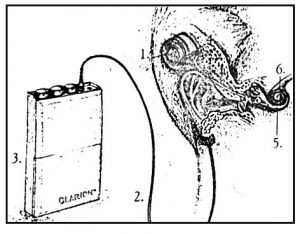 Quite a number of Lions Club members use hearing aids and this includes the writer.
Some further discussion of hearing aids might therefore be of interest.

How to Put On or Remove Hearing Aids

Proper Use of Hearing Aid Batteries

Relative to batteries, one source recommended the following:

1.  After removing the tab from the battery, let the battery sit for 3-5 minutes before installing it in your hearing aid.  This “activation” time allows air to reach the material inside the battery and activate them.

2.  When you’re not wearing your hearing aid, turn it off or open the battery door to minimize battery drain.

3.  If you won’t be using the hearing aid for an extended period of time, remove the battery entirely.

Thus, it is not a good idea to keep extra batteries in your car where temperatures could range from zero to 100.

In some cases, ear wax in the entryway of the hearing aid blocks any sounds from getting in and makes the hearing aid useless.  This is a problem the writer has with his hearing aids (“receiver in the canal”) and was solved by a product called “”Hear Clear Receiver Was Guard.”  There are videos on how to use the product on YouTube under that name.

Too Much Ear Wax

Go to an audiologist and have the ear wax removed professionally.

The following news item of Friday, October 13, 2017, is from the Hearing Loss Association of America (HLAA)

“On August 18, 2017, President Trump signed the Over-the-Counter Hearing Aid Act of 2017 into law.  With this groundbreaking legislation Congress and the President have sent a message to America that people with hearing loss need – and deserve – more affordable and accessible hearing health care.

“The Hearing Loss Association of America has supported the Over-the-Counter Hearing Aid Act of 2017 since it was first introduced in the Senate by Elizabeth Warren (D-MA) and Chuck Grassley (R-IA) in December of last year and then again in March of this year.  The companion House bill was introduced by Representatives Joe Kennedy III (D-MA) and Marsha Blackburn (R-TN).  This legislation shows a true Congressional bipartisan effort that will ultimately benefit all consumers with hearing loss, especially the millions of people who currently don’t have access to hearing health care simply because they can’t afford it.

“The Over-the-Counter Hearing Aid Act of 2017 will make certain types of hearing aids available over the counter to adults with mild to moderate hearing loss.  In addition, the legislation requires the Food and Drug Administration (FDA) to regulate this new category of OTC hearing aids to ensure they meet the same high standards for safety, consumer labeling and manufacturing protection that all other medical devices must meet.  This gives consumers the option to purchase a safe, high-quality, FDA-regulated device at lower cost.

“Creating a new category of OTC hearing devices was one of the 12 recommendations in the report, Hearing Health Care for Adults: Priorities for Improving Access and Affordability, issued by the National Academies of Sciences, Engineering, and Medicine (NAS) in June 2016, which HLAA fully supported.

“HLAA has been working diligently with lawmakers on this legislation. It became clear as we spoke to legislators that HLAA – the consumer voice – had a significant say in this conversation.  We have no financial interest in this battle, but we do hear over and over from consumers with hearing loss about the trouble they have getting access to hearing aids.  We also hear from people who have retired and who feel isolated and alone, simply because they cannot cover the cost of hearing aids.

“The next step is for regulations to be written.  The FDA has been charged with creating this new category of hearing devices and writing the rules that will ensure the products are safe and effective.”